Attention! Event dates may be postponed. Follow the announcements. 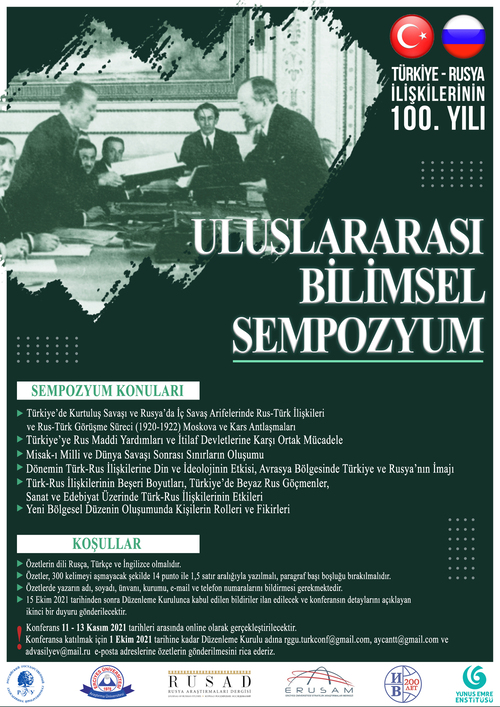 The year 2021 marked the 100th anniversary of important milestones in the history of Soviet-Turkish relations: the Moscow Treaty of Friendship and Brotherhood between the RSFSR and Turkey of March 16, 1921, the Kars Treaty between the Georgian, Armenian and Azerbaijani SSRs and Turkey through the mediation of the RSFSR, the mission of M.V. Frunze to Turkey and the preparation of a treaty between Soviet Ukraine and Turkey (signed on January 2, 1922). The International Russian-Turkish Center of the Russian State University for the Humanities and the Institute of Oriental Studies of the Russian Academy of Sciences together with the Center for Strategic Studies of Erciyes University (ERUSAM) and the Journal of Russian Studies (RUSAD) invite You to take part in the conference dedicated to understanding the significance of these events and their impact on Russian-Turkish relations. The following topics are proposed for discussion:


The conference will be held online from 11 to 13 November 2021. To participate in the conference, we ask You to send applications and brief abstracts by October 1, 2021 to the following addresses: rggu.turkconf@gmail.com, advasilyev@mail.ru aycantt@gmail.com Abstracts are accepted in Russian, Turkish or English, Times New Roman font, 14-point size, 1.5 spacing, the total volume is not more than 300 words. In the application, you must indicate the personal data of the author: full surname and name, place of work, position, academic degree and titles, contact e-mail and phone number. The results of the conference are expected to be published. The deadlines for sending the full texts of the reports for publication in the yearbook and information about the design will be sent to the participants who sent applications and abstracts in a second information letter after October 15, 2021.