Dr. Irakli Bolkvadze, Vice-Rector for Administrative and Social Work made a presentation on the results of extracurricular work with students of RSUH, in which he spoke about the socio-economic, cultural and creative activities and the development of student self-government at the University.

Additionally, three alternative options for accommodating nonresident students have been found: Dorm at metro Semenovskaya", Dorm "Konkovo, 35" and Dorm "Voskhod". The dormitory on Kirovogradskaya st. in 47 blocks was renovated. In the dormitory on Miusskaya Square, renovations were carried out to replace windows, renew the facade and roof. The security service of RSUH has also updated the video surveillance system.

The Vice-Rector added that the University planned to increase the number of dorm rooms by transferring rooms from the non-residential fund.

Dr. Bolkvadze paid special attention to the educational component of extracurricular work with students. In 2021, the University approved the Work Program of Education and the Calendar Plan of Educational Work, the local regulatory norms for RSUH on issues of education of students, adopted in accordance with the changes in federal legislation in this area. The Vice-Rector shared with the audience the results of the tutoring week organized as part of the adaptation of freshmen to student life, social and psychological testing of students, a set of measures to prevent negative manifestations in the youth environment and activities aimed at promoting healthy lifestyle and sports.

Irakli Revazovich also said that students were actively involved in organizing and holding events of a patriotic orientation. University representatives conduct excursions to Russian cities and places of military glory.

“In April, the students of RSUH were invited by the Russian Military-Historical Society to participate in the International Search Expedition “Rzhev. The Kalinin Front" as anthropologists. During the search expedition, the remains of about 400 Red Army soldiers were unearthed. The preserved tags allowed 15 names to be identified,” added the Vice-Rector.

On December 7, a session of the Academic Council of RSUH took place, at which the results of extracurricular work with students were summed up, topics of dissertations approved and an additional educational program presented. 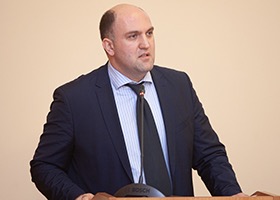