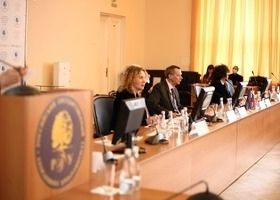 The 14th Readings in Humanities of RSUH opened with a session of the Academic Council and will continue until April 13. You can access the program here.

Rector Bezborodov congratulated the University faculty on the anniversary and greeted the honored guests.

“Our university was founded on the basis of the Moscow State Institute of History and Archives, which at that time comprised four departments. Now, turning the page of history, we can proudly say that RSUH has 9 institutes, over 20 faculties, more than 16 thousand students and about a thousand faculty members. RSUH cooperates with universities in 53 countries of the world. We are moving in the direction in which Russia is heading. I want to congratulate every employee of the University on this anniversary, as without you it would have achieved very little! We will continue to work and proudly bear the banner of our University, ” said Rector.

“Today is an important day. The history of RSUH is being made by you, your alumni and students. As regards academic and educational process, RSUH offers the best conditions for young scholars,” said Dr. Natalia Kosikhina.

RSUH also received a greeting from Mr. Viacheslav Volodin, Chairman of the State Duma. He congratulated the University, expressed the regard he had for RSUH academic and educational approaches and noted the importance of cooperation between the University and the CIS countries.

Mr. Petr Kucherenko, Deputy Minister of Science and Higher Education of Russia, noted the uniqueness of RSUH, which was “not only a very large academic institution, but also a unique socio-cultural university”.

“RSUH, one of the largest universities in the country, is famous for its rich history and is widely known outside Russia,” – such were the words of Mr. Valery Falkov, Minister of Science and Higher Education, conveyed by Petr Alexandrovich. - Practical innovations, modern technologies, innovative projects implemented by the faculty allow the University to keep up with the times, develop dynamically and occupy leading positions in many areas of humanities. Thanks to dedication, research, high professionalism and loyalty to traditions, RSUH invariably achieves success in implementing the most daring plans and ideas."

Dr. Sergey Kravtsov, Minister of Education of Russia, congratulated RSUH on the anniversary and shared the common pride for all the achievements, victories and accomplishments that are realized thanks to the faculty and students of the University. He noted the importance of RSUH in promoting Russian language and culture abroad.

Dr. Anzor Muzaev, Head of the Federal Service for Supervision in Education and Science, drew attention to the activities of the executive body and faculty of RSUH in the development of humanities.

“RSUH is conducting a huge amount of very important work in the area of development of the Russian language not only in the CIS, but also in other countries of the world. This plays an important role for Russian science ", said Dr. Muzaev.

Dr. Andrey Artizov, Head of the Federal Archival Agency, a graduate of the Institute of History and Archives, talked about the of the role of the University in the development of humanities.

“It is not so easy to define the enormous work carried out by RSUH in the name of Russian science. RSUH can be called the base of Russian humanities. The University is constantly working on the development of humanities in Russia. Stability in the transfer of knowledge to the new generation speaks of a high level of education,” said Dr. Artizov.

Metropolitan Hilarion of Volokolamsk, Chairman of the Department for External Relations of the Moscow Patriarchate, Rector of the Saints Cyril and Methodius Graduate and Postgraduate Studies, also noted the important role of international programs and projects of the RSUH in Russian education.

He conveyed congratulations on behalf of the Patriarch of Moscow and All Russia Kirill to the faculty and staff of RSUH.

“RSUH and Russian Orthodox Church have developed a relationship of strong cooperation aimed at the spiritual and moral education of the younger generation and the formation of love for the Fatherland,” says the patriarch’s congratulatory  letter.

Mr. Mikhail Shvydkoy, Special Representative of the President of the Russian Federation for International Cultural Cooperation, noted (in a video message) that “RSUH is now one of the best liberal arts universities not only in Russia, but also in the post-Soviet space, as evidenced by its academic achievements and the level of knowledge of its graduates".

Dr. Alexander Kibovsky, Minister of the Moscow Government, Head of the Department of Culture of the City of Moscow, and RSUH alumnus, drew attention to the high professional training of the teaching faculty of RSUH, and also noted the importance of the Institute of History and Archives for the Moscow government.

“I studied at the time when the Institute of History and Archives was becoming the base for RSUH. The University was forming right before our eyes, it was emotional for everyone, because something new was being created. The teachers taught us responsibility, taught us to work hard and to treat archives and history with respect. Continue the traditions that were laid back in my student years. Continue to train future specialists!” emphasized Dr. Kibovsky.

Dr. Alexander Chubaryan, Academic Director of the Institute of General History of the Russian Academy of Sciences, joined in the congratulations.

“One of the most important achievement of the people who created RSUH is that they brought a fresh approach into humanities. Thanks to this, we have become part of global humanities.”- said Dr. Chubaryan. - The place and role of humanitarian knowledge is being discussed all over the world. Technological progress today is associated with digitalization, computerization while pushing humanities aside. Technical experts are often skeptical about liberal arts research. Together we must find new dimensions in these new conditions. Find a new understanding of the role of humanitarian knowledge not only for science, but also for modern society and education."

Dr. Konstantin Mogilevsky, Executive Director of the Foundation for History of the Fatherland, Chairman of the Board of the Russian Historical Society, focused on the role of the Institute of History and Archives in the history of Russia and paid particular attention to the high quality of knowledge of its graduates.

“The professional historical community is always interested in maintaining the golden standards of knowledge, study and teaching of history. In this sense, RSUH remains one of the key centers of education,” Dr. Mogilevsky emphasized.

Dr. Olga Pavlenko, Vice-Rector for Research, read out the greeting from Dr. Valery Tishkov, Secretary of the Department of Historical and Philological Sciences of the Russian Academy of Sciences.

“RSUH symbolizes the modern Russia. The University has come an amazing way together with the country. For me, RSUH is a force behind humanitarian education,” Dr. Guzman said.

Dr. Maria Matveeva, Director of the Russian-Austrian public forum "Sochi Dialogue", expressed gratitude to the University faculty for their active work in the field of education.

“The opening of the program “Russia-Austria: history, politics, economics, culture” took place in a form of a joint venture with RSUH. The great pride of the University is its students, who have actively participated in our events. We are grateful to RSUH for its support and contribution to the activities of the Forum,” she said.

Dr. Stefan Karner, Professor, Honorary Doctor of Historical Sciences, Co-Chairman of the Russian-Austrian Commission of Historians, congratulated RSUH in a video message on behalf of the University of Graz, the Boltzmann Institute for the Research of the Consequences of Wars, with which RSUH has had a cooperation agreement since 1991.

“With your help, we have successfully completed important research projects. One of the latest projects was the book “Russia-Austria: Milestones of Joint History” under the auspices of our joint commission of historians,” noted Dr. Karner. “A year ago, we implemented the Bachelor's program “Russia-Austria culture, history, politics, economy" into RSUH curriculum.

“RSUH in the 90s was a unambigious response to the socio-political situation of the previous decades,” said Dr. Klaus Vasik , Director of the Institute for Intensive Study of Foreign Languages ​​in North Rhine-Westphalia. - A response to Soviet stagnation with its inherent limitations in literary and cultural discourses. Russian State University for the Humanities - it sounded bold, interesting, attractive. It promised something different, and RSUH quickly became a "gravitational center" for many prominent Russian and foreign scholars”.

Dr. Klaus Vasik drew attention to the fact that the RSUH has been and still remains a new Russian chronotope of innovative thinking in humanities. He also said that only the humanities could explain the surrounding reality and give people a reference point in our changing world.

Dr. Yuri Zinchenko, Director of the Institute of Psychology of the Russian Academy of Education, wished everyone related to RSUH success, talent, purpose and inspiration.

Dr. Alexei Lubkov, Rector of Moscow State Pedagogical University, spoke of solidarity and unity: "The bonds of brotherhood are the most important thing that unites educational spaces in both Russia and Moscow."

Dr. Vyacheslav Danilovich, Rector of the Academy of Management under the President of the Republic of Belarus, noted that in 30 years the staff of the RSUH had achieved great success and won leading positions in the field of training highly qualified specialists in humanities and formed a new promising model of education. He expressed hope for further fruitful cooperation.

“Today RSUH is a constellation of outstanding scholars and experts,” said Dr. Sergey Lebedev, Chairman of the Executive Committee and Executive Secretary of the Commonwealth of Independent States, in his congratulatory speech. Dr. Alexander Yakovenko, Rector of the Diplomatic Academy of the Russian Foreign Ministry, called RSUH one of the most famous and prestigious educational institutions in Russia. Dr. Alexander Kuznetsov, Permanent Representative of the Russian Federation to UNESCO, highly praised the achievements of RSUH in the field of humanities and social sciences.

Dr. Olga Pavlenko, Vice-Rector for Research, read out a number of congratulatory letters, from  Dr. Fyodor Voitolovsky, Corresponding Member of the Russian Academy of Sciences, Director of the Primakov Institute of World Economy and International Relations of the Russian Academy of Sciences, Dr. Mr. Zhang Hanhui, Ambassador Extraordinary and Plenipotentiary of the People's Republic of China to the Russian Federation, who drew attention to the fact that for many years RSUH had been actively involved in humanitarian cooperation between China and Russia. "The embassy is happy to maintain the closest contacts with RSUH" - noted Mr. Zhang Hanhui.

Mr. Muhammadyusuf Imomzoda, Minister of Education and Science of Tajikistan, spoke about the high level of research and education of RSUH, which allowed the University to quickly become a flagship in the field of humanitarian education.

According to Mr. Sergey Gvozdev, Vice-President of the Union of Aircraft Manufacturers of the Russian Federation, the University faculty, using the modern pedagogical technologies, not only achieved high educational results, but also made the education process itself interesting and exciting for students.

Dr. Pavel Kyung, Director of the All-Russian Research Institute of Documentation and Archival Affairs, a graduate of RSUH, shared his memories of the years of study. “It was very important for us that we studied within the walls of the Institute of History and Archives,” he said.

Dr. Anastasia Pavlova, Head of the Tourism Committee of the Business Center for Economic Development of the CIS, spoke about her professional success after graduating from RSUH.

Dr. Vera Zabotkina, Vice-Rector for International Relations of RSUH, stressed that the University cooperated with 193 universities around the world. She read out congratulations from the rectors of foreign partner universities.

At the end of the session of the Academic Council, Dr. Irina Bakanova, Director of the Museum Center of RSUH, spoke of successful and fruitful cooperation of the Center with RSUH: “Through culture, art, through our projects, the University has become recognizable in many museum institutions in Russia and far beyond its borders. We are an integral part of RSUH ”.

After the session of the Academic Council, RSUH officials unveiled the exhibition "We will bring the Museum to you!" dedicated to the 25th anniversary of the Museum Center of RSUH, created in 1996.