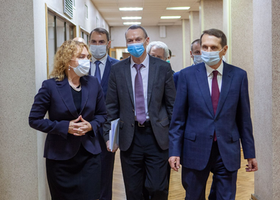 On November 3, 2020, a ceremonial meeting was held at RSUH to celebrate the 90th anniversary of the Institute of History and Archives. The guest of honor was Mr. Sergey Naryshkin, Chairman of the Russian Historical Society.

On the eve of the meeting, an excursion was organized for the guests of the University to the Museum and Educational Center, created as a result of a joint project of RSUH and the Tsvetaev Academic Art Museum. Mr. Sergey Naryshkin, Chairman of the Russian Historical Society and Mr. Konstantin Mogilevsky, Chairman of the Board of the Society, together with the University administration and faculty members of the Institute of History and Archives, also examined an exhibition of archival documents from the funds of the State Archive of the RF, Russian State Archive of Modern History and the RSUH Archive, used in practical classes on archival studies.


In the keynote address Mr. Sergey Naryshkin congratulated RSUH on the 90th anniversary of the Institute.

“It is a great honor for me to take part in the ceremonial meeting dedicated to the 90th anniversary of the renowned Institute of History and Archives of Russian State University for the Humanities. First of all, I would like to congratulate everyone involved in this date. Maintaining the high level of the Institute is the most important task. Success here depends not only on the leadership of the University, but also on the teachers themselves, undergraduate and graduate students. It is very important to preserve the traditionally strong source study training, because it is this that distinguishes historians-archivists from representatives of other humanitarian disciplines, and also contributes to the formation of a special type of analytical thinking,” said the Chairman of the Russian Historical Society.

In his speech, Mr. Naryshkin emphasized the high value he placed on the participation of the Institute in the implementation of projects of the Russian Historical Society.

During the meeting, he recalled the March meeting of the Society Presidium members with Mr. Valery Falkov, Minister of Science and Higher Education of the Russian Federation, during which “an agreement was reached that there would be no reduction in the number of budget places allocated for the training of students-historians in the near future in the country ".

At the end of his speech, Mr. Naryshkin wished Rector Bezborodov happy birthday and gave him a souvenir - a statuette of owl symbolizing wisdom.

In turn, Rector Bezborodov expressed gratitude to the faculty of the Institute, emphasizing their contribution to the training of future archivists, historians and document specialists who fully meet the challenges of the labor market in the digital era.

“The Institute of History and Archives is a unique educational institution that reflects the long-term aspirations of the Soviet-Russian higher school to have our education conform to the interests of our country. Over the years, the staff of the Institute has trained over 15 thousand specialists in archival science, records management and history,” said Rector.

Rector also paid special attention to the location of the Institute on Nikolskaya Street, where historical exhibitions are periodically held in the open space format jointly with the Society.

“It is a great historical responsibility that the Institute has preserved and increased its educational wealth, working from the very center of Moscow. We know that the officials of the city and the country have always wanted this institution to remain in the very center of the capital, and I believe that our team did not disappoint,” said Dr. Bezborodov. “The Institute of History and Archives of RSUH is an institution of high social and state responsibility, as evidenced by our work around the world. Currently we are expanding on the basis of the academic and education platform in East Africa by establishing a Center for Applied African Studies in 2020.”

The rector presented the RSUH certificate of honor for outstanding services in the development of historical research and the preservation of the traditions of the academic and pedagogical school of the Institute to Dr. Konstantin Mogilevsky.

“I am proud and happy to be present at this anniversary, because I realize the importance of our Institute education and our country. Our graduates, who hold high positions in Russia, are a sign of this. The Institute has always been characterized by a combination of innovation and preservation of traditions. I recall the wealth of professional communication with Dr. Nikolai Eroshkin, who created a whole school of history of state institutions and public organizations."

Dr. Efim Pivovar, President of RSUH, presented Dr. Naryshkin with books written by the faculty of the Institute of History and Archives.

Dr. Vladimir Kozlov, Professor of the Department of Archival Science, spoke about the role of the Institute in exposing the falsifications of history. According to him, the Institute is carrying out large-scale work in this direction.

“Since the 1930s, the Institute has been exposing the falsifications of history in order to preserve documentary memory about Russia, as well as about the Moscow Kingdom of the Russian Empire. The presence of Sergey Naryshkin at the ceremonial meeting is important and indicative. It demonstrates that the authorities understand the role of RSUH and the Institute not only in the study of history, but also in preserving the documentary memory, on the basis of which our history is written ”.

Dr. Vladimir Kozlov presented Dr. Naryshkin with a book on document management as a  commemoration of the 90th anniversary of the Institute.

Certificates of honor for their contribution to the development of higher education were received by the Dr. Elena Burova, Acting Director of the Institute of History and Archives, and Dr. Efim Pivovar, President of RSUH.

Dr. Mikhail Kozhokin, Vice-Rector for Development and Information Resources of RSUH, Dr. Konstantin Krasnoslobodtsev and Dr. Rifat Sultanov, analysts of the Research Department, were also awarded certificates of merit for the preparation of publications of the historical and archival profile.

At the end of the meeting, Rector Bezborodov, presented the chairman of the Russian Historical Society Dr. Sergey Naryshkin with a unique collection “Letters of the War years. Correspondence of school teachers and their students” and the book “Institute of History and Archives in the history of Russian higher education ”. 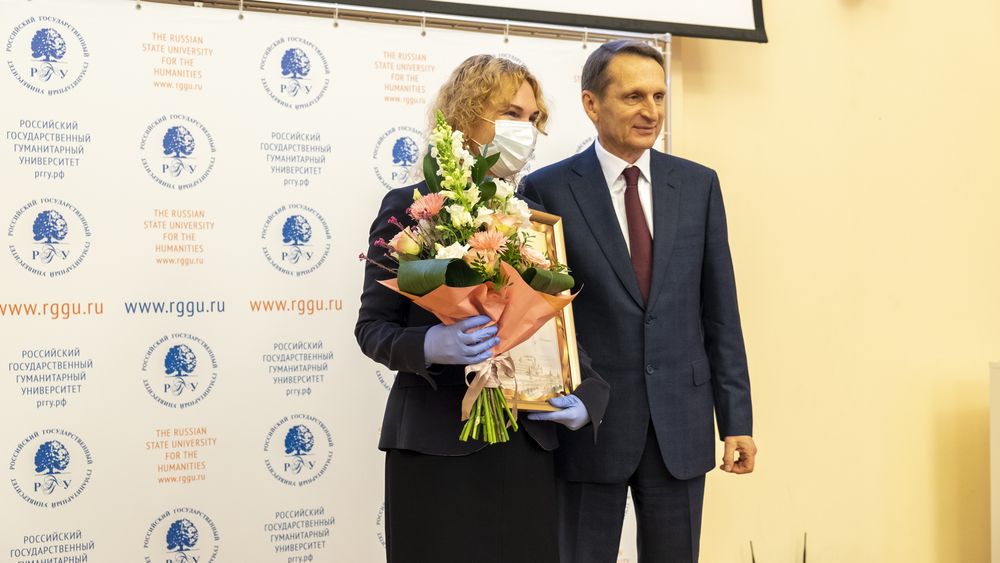 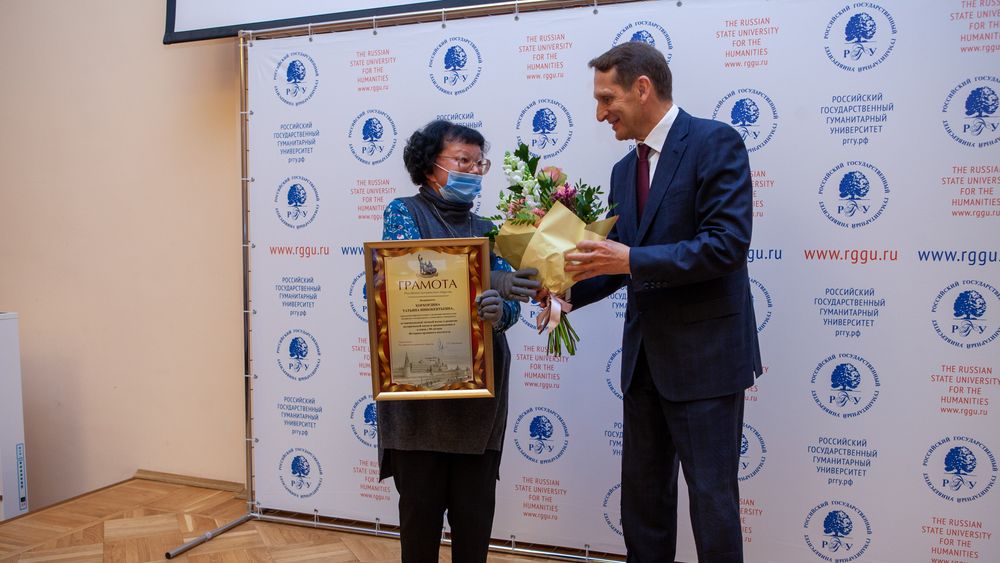 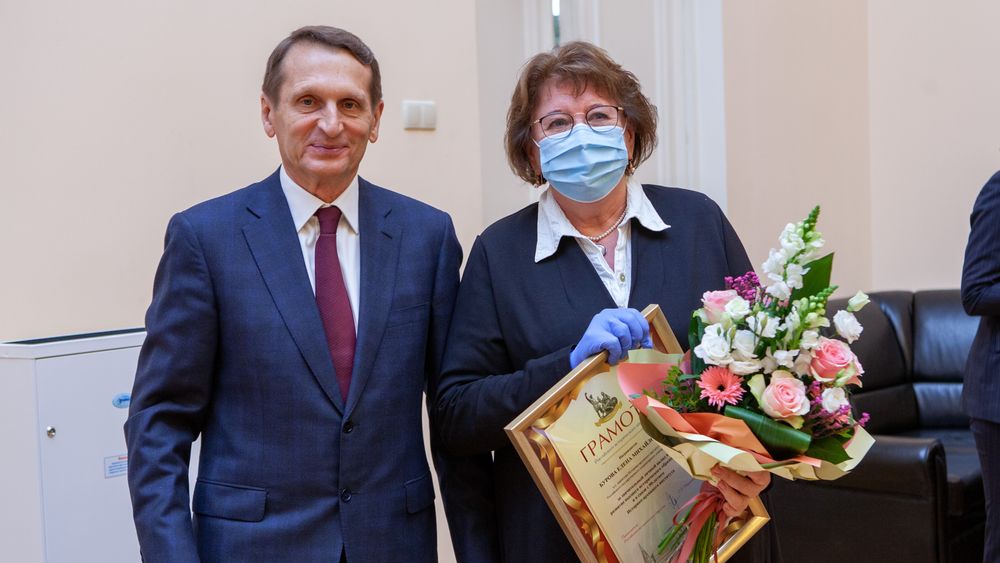 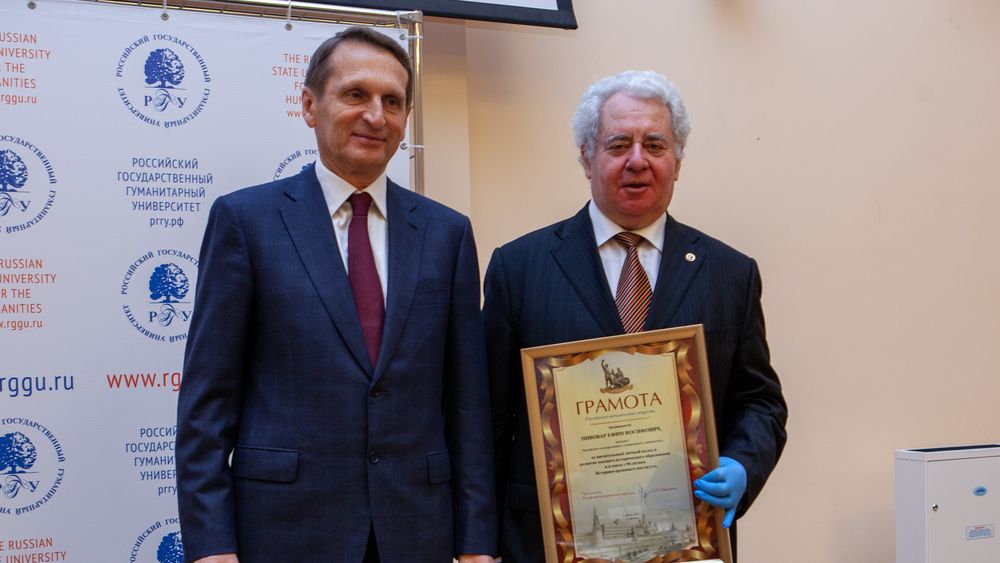 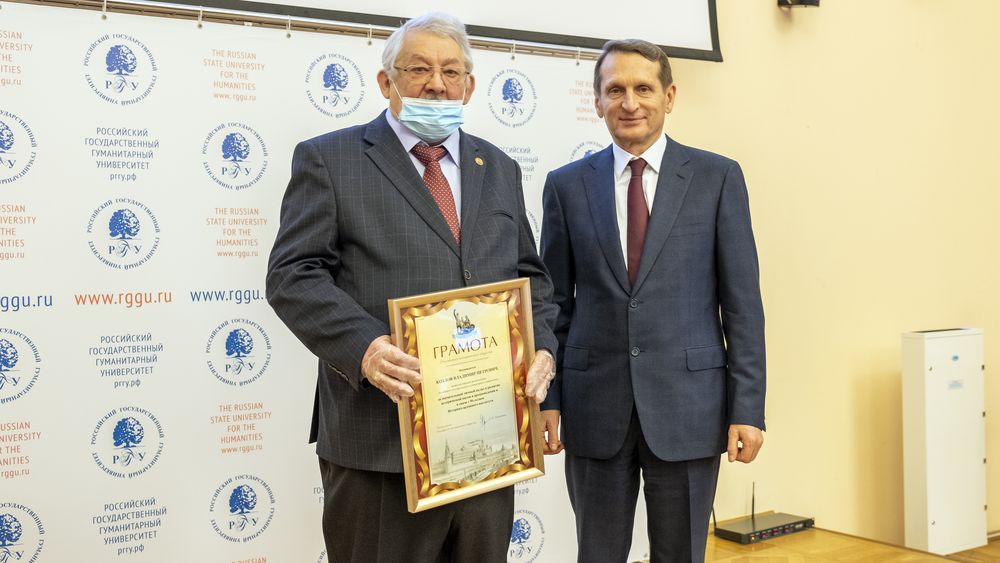 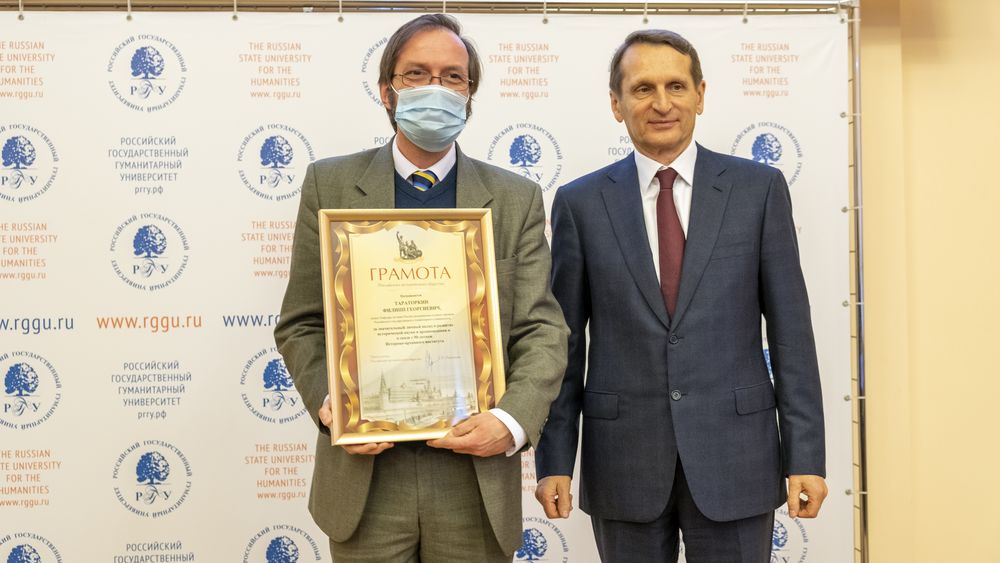 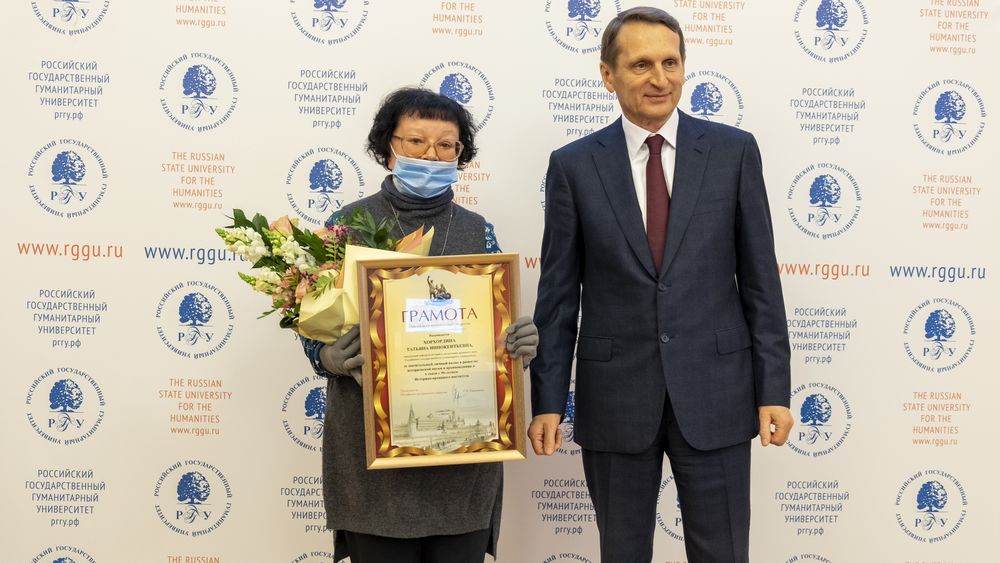 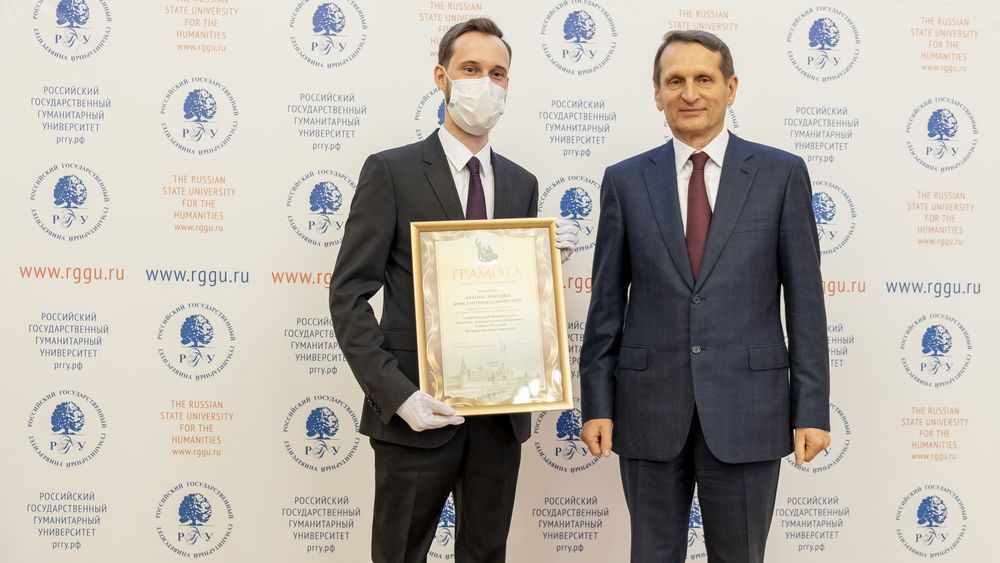 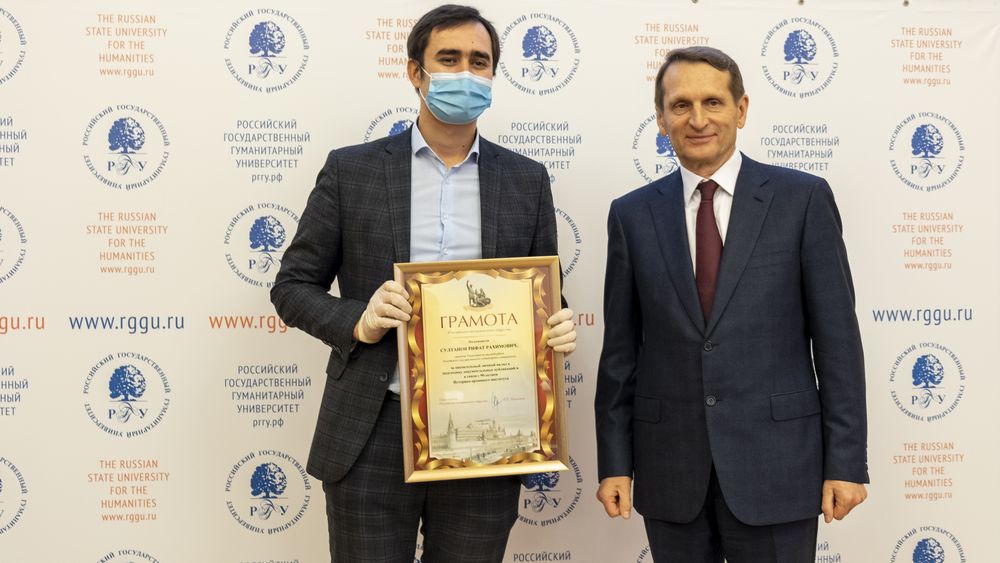 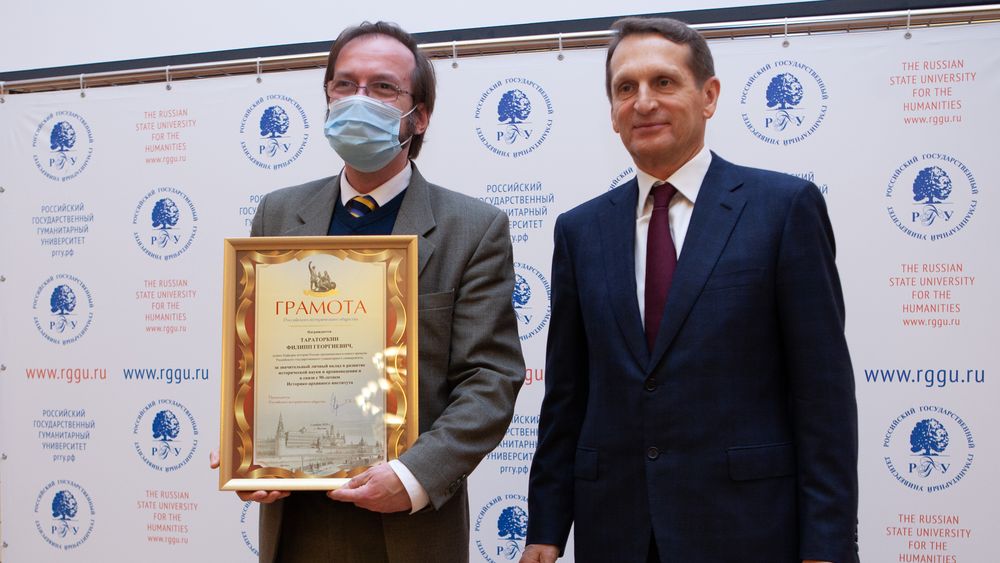 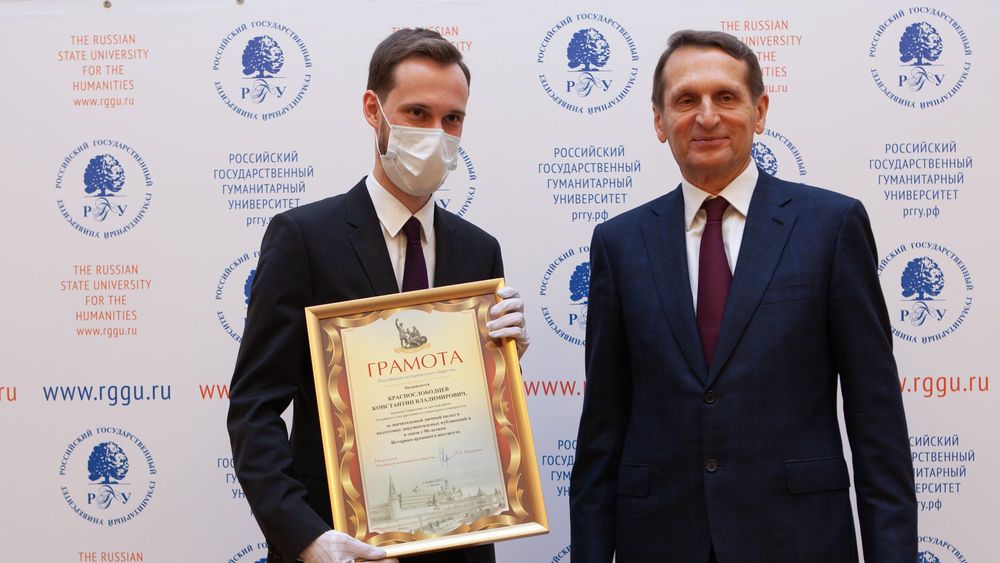 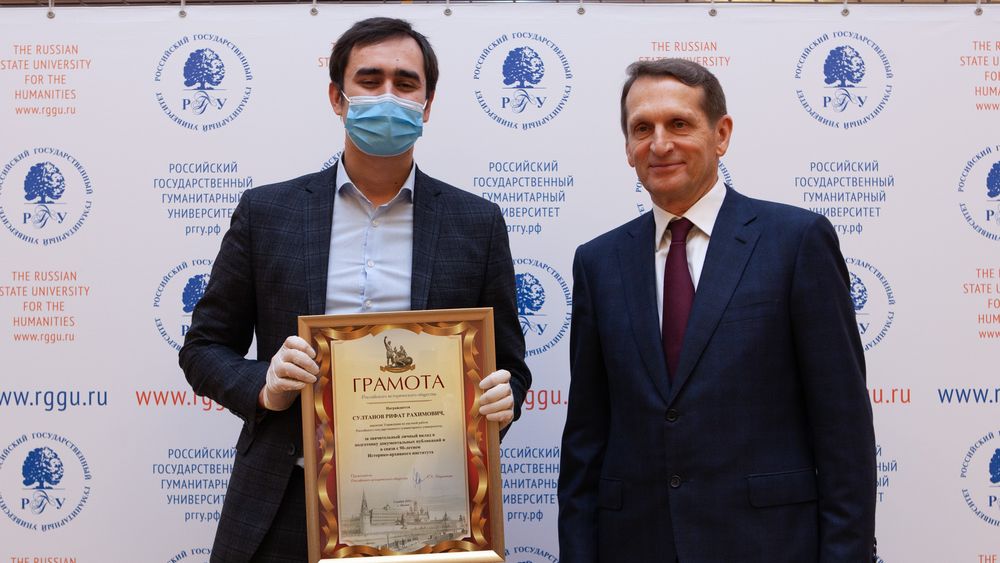