The monthly student research workshop was held at RSUH via ZOOM.

The seminar was attended by 2nd year students of the Faculty of International Relations and Area Studies of the Institute of the History and Archives.

She also mentioned the reasons for the destabilization of the north-east region of India resulting from the new amendments.

Professor Alexander Stolyarov spoke about the protests of the residents of the North-East who strongly opposed this bill.

Ms. Amina Mukhametkhanova, Ms. Sofya Kiseleva, Ms. Maria Skorobogatova (2nd year students of the Department of Foreign Area Studies and Foreign Policy of the Institute of Regional Development and Social Development) spoke about how the Indian government had informed society about the amendments, and what consequences had benn observed in connection with their introduction. The students also described the street protests against the new law on granting citizenship to non-Muslim immigrants and mass demonstrations that had taken place in the largest Indian cities - Delhi, Mumbai, Hyderabad and Kolkata in 2019-2020.

The goal of the workshop is to improve the students’ professional and academic skills and competencies. 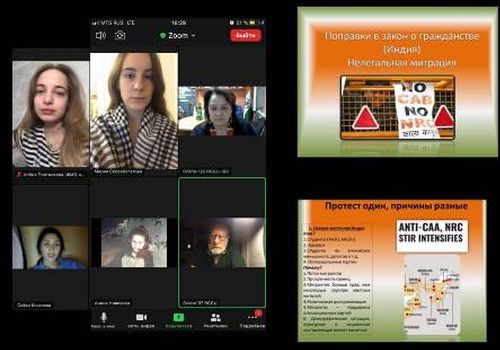