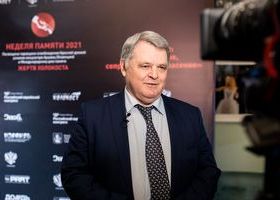 On January 18, Russian Academic Youth Theater hosted the first event within the framework of the 7th All-Russian Holocaust Remembrance Week: the opening and first presentation of a traveling historical and documentary exhibition "The Holocaust: Destruction, Resistance, Salvation". The Exhibition will be open to theater visitors until Monday.

Dr. Leonid Tyorushkin, Head of the Archives of the Holocaust Center described the Exhibition for journalists, Dr. Roman Zhigun, researcher in the Department of Archives, conducted a tour for the guests. The emphasis was placed on the central documents and trajectories of human destinies presented at the Exhibition, as well as on its multimedia capabilities. Each stand has a separate page on the Exhibition website . In many cases the viewer can hear the living voice of the very person whose photograph he sees on the stand.