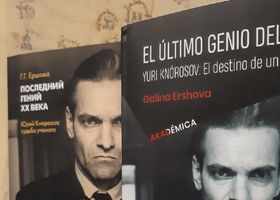 At the plenary session of the Central American Parliament, Dr. Galina Ershova presented the monograph "The Last Genius of the 20th Century"

At the plenary session of the Central American Parliament (PARLACEN), held on February 18, Dr. Galina Ershova, professor of Russian State University for the Humanities, Director of the Knorozov Mesoamerican Educational Center of RSUH, presented the monograph "The Last Genius of the 20th Century" dedicated to the academic activities of Dr. Yuri Knorozov, a Russian scientist who deciphered the writing of the ancient Mayans. This was reported by the press service of the Ministry of Foreign Affairs of the Russian Federation.

In the presentation of her work, organized with the support of the Russian Federation in Guatemala, Dr. Ershova noted the importance of the work of Dr. Knorozov for the development of research on the history and culture of the ancient Mayans, the results of which have had a direct impact on the development of Russian-Latin American cultural, academic and political relations, and the awareness of the cultural and historical significance of the ancient civilization underlying the modern Guatemala and southeastern Mexico.

The PARLACEN representatives showed interest in the work of Dr. Ershova and its dissemination in the countries of the region. The book "The Last Genius of the 20th Century" was first published at RSUH in 2019, and in the summer of 2020 it was translated into Spanish and published by the publishing group AKAL, based in Spain and Latin America.

The presentation was timed to coincide with a series of events dedicated to the 200th anniversary of the independence of the countries of Central America.