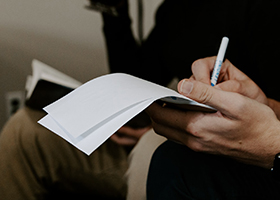 At the session of the Academic Council of RSUH on October 27, the results of the admissions campaign were summed up, and the key directions of the University's development were discussed.

“Due to the coronavirus crisis, we promptly switched to the long distance learning format in March, the Open Days were held both online and face-to-face. Several Faculties met with applicants weekly, and a total of 124 online Open House Days took place from May to June. This had a positive effect on the reception results. It is necessary to improve the system of accepting documents electronically, but we have exceeded the record of the last year, partially because as of July 20 it was decided to accept applications in person, and only 5-6 Moscow universities went ahead with this.

Internal exams were also held in the new format: they were partially taken online from home, and partially in 50 computer classes of RSUH. The Admissions team made every effort to remove any obstacles along the way."

Nadezhda Ivanovna also reminded that this year a new methodology for calculating admission quotas would come into effect.

Dr. Pavel Shkarenkov, Vice-Rector for Continuing Education, added that in 2020 the number of applications submitted for master's programs had increased significantly. Over 70% of applications were submitted by graduates of other universities. The competition has also increased, and the master's program shows growth in the extramural form of training. Traditionally, the highest competition is shown by the Advertising and Public Relations program.

“We propose to strengthen the extramural component in the Admission Rules, this will significantly increase the admission opportunities,” noted Vice-Rector. - It is necessary to revise the master's programs, abandoning those that fail to reach their minimal admission figures. Yet we need to preserve those rare programs aimed at developing unique schools. Precise advertising activities of faculties during academic year, including in social networks, are very important.

In accordance with the decision of the Intergovernmental Commission on Economic Cooperation between the Russian Federation and the Republic of Uzbekistan and on behalf of the Ministry of Science and Education, RSUH was instructed to create a branch at Samarkand State University. At the moment, a roadmap plan has been developed, and the branch should be opened next year.

In addition, the Center for Applied African Studies is to be created at RSUH.

“RSUH has been invited to the pool of Russian universities that are starting their activities on the African continent,” Rector Bezborodov noted in his speech. - The University proposed a strategy for working in Uganda to the Ministry of Education and Science and FAO. At the same time, a decision was made to create a Center for Applied African Studies, using the resource in the form of relevant academic and educational programs, which has been formed over the years at RSUH.”

The new Center will train specialists and promote the Russian language and culture in Africa. It will be headed by foreign policy expert Dr. Shivleta Tagirova. “The cooperation between the two countries is the basis on which further ties will be built in the field of agriculture, mineral resources, ecology and space exploration. This is a major scientific and educational initiative. This work is the basis for protecting the national interests of our state, ”said Dr. Tagirova.

Dr. Vladimir Shunikov, Director of the Institute of Continuing Education, reported on the work of the Academic Council in the 2019/2020 academic year.

“In October 2019, a new composition of the Council was formed,” said Dr. Shunikov. - The program for the development of RSUH for 2020-2024 was adopted, as well as the decision to renegotiate the Collective Agreement. The Academic Council considered the results of the admission campaign, organization of the educational process, academic and international activities, information policy of the University, budget, transition of employees to an effective contract, preparation for accreditation."

By the decision of the Academic Council, the Faculty of Archival Science and Records Management, the Faculty of History, the Institute of Mass Media and Advertising were created during this period. Some departments have been reorganized. New laboratories and centers have been opened. Grants for research activities were approved, the results of academic competitions were summed up, candidates were nominated for the President's Grant, for the RF Government Award and the Moscow Government Prize.

The work plan of the Academic Council of RSUH for the 2020/2021 academic year was approved. It pays special attention to the position of the University in domestic and international rankings, the creation of the interactive project "Map of Science of RSUH", discussion of the plan for the 90th anniversary of the Institute of History and Archives, the project "Museum of History of RSUH" and a report on participation in the Youth Russian Historical Forum "My Country - my Russia".

During the meeting of the Council a commendation was awarded to Dr. Elena Burova, Acting Director of the Institute of History and Archives and Dr. Valery Tyupa, Head of the Department of Theoretical and Historical Poetics.

The Kondratyev International Fund awarded Dr. Jean Toshchenko, Head of the Department of Theory and History of Sociology, with a silver medal for his contribution to the development of social sciences.

Dr. Elena Kosovan, Dr. Natalia Makarova, Dr. Maria Rukodelnikova and Dr. Lilia Kholkina were promoted to the position of Associate Professor. The right of supervision of graduate students was granted to Dr. Dmitry Torshilov, Associate Professor of the Department of Classical Philology.