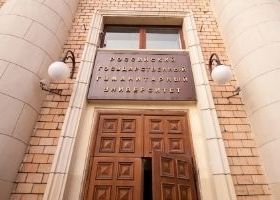 Academic Council of RSUH approved a number of structural changes

On March 2, a session of the Academic Council was held, at which an agreement on cooperation between the University and the Institute of Psychology of the Russian Academy of Education was signed. Also, the members of the Academic Council elected the dean of the Faculty of Advertising and Public Relations of the Institute of Mass Media and considered the introduction of structural changes.

The cooperation agreement was signed by Rector Bezborodov and Dr. Zinchenko, Director of the Institute of Psychology.

“We came to the conclusion that RSUH and the Institute of Psychology could legitimize their cooperation by concluding a long-term agreement, within the framework of which they would outline the main milestones of our developments in the educational strategy. We can become mutually complementary partners,” Rector said during the signing ceremony.

The Director of the Institute of Psychology noted the importance of cooperation with RSUH for both parties.

“This agreement is a new page that fixes the already established fruitful ties that exist between the Institute of Psychology and RSUH,” said Dr. Zinchenko.

“We are all united in greenlighting this transition. Shaping the new look of the Faculty of International Relations and Foreign Area Studies, we understand that the Faculty of History, Political Science and Law will develop by leaps and bounds. We have no right to hinder this development. It is to be transformed into a modern structural unit, which will have partners of the level of the Institute of Oriental Studies of the Russian Academy of Sciences, etc.", - said Dr. Bezborodov.

The relevant documents will be submitted to the Academic Council soon.

A preliminary approval was given to the report delivered by Dr. Mikhail Kozhokin, Vice-Rector for Development and Information Resources, titled "Information policy of RSUH: Results of 2020 - Prospects for 2021". The report was presented at the meeting of the Academic Council on January 26.

Dr. Abaev presented to the members of the Academic Council a report "The Faculty of Advertising and Public Relations: Professional Demand and Prospects for the Development of the Faculty", in which he spoke about the results of the Faculty's activities and the new directions it is taking.

Dr. Pavel Shkarenkov, Vice-Rector for Continuing Education, presented the results of the Olympiads for schoolchildren held at RSUH.

The final stages of five school Olympiads took place at the University from February 27 to February 28. Over 10.800 people took part in the qualifying round, which is 147% more than the number of participants in 2020.

The Council approved amendments to the regulation on the reduction of the tuition. According to the amendment, if the tuition fee is lower than the basic standard established by the Ministry of Education and Science, then the discount will be reset to a level that does not exceed these standards.

“RSUH has not increased the cost of education for several years,” said Dr. Nadezhda Arkhipova, Vice-Rector for Academic Affairs. - The Ministry of Science and Higher Education establishes a subsidy for specific areas of training. It turned out that sometimes our tuition fees and the amount of the subsidy do not coincide, so when a discount is provided, the amount turns out to be lower than the standard. We are not entitled to do this, so we ask to approve the change."

Rector Alexander Bezborodov also informed the members of the Council about his intention to hold a meeting with the students together with Dr. Irakly Bolkvadze Vice-Rector for Administrative and Social Work, specifically about the issue of food courts at RSUH.

Dr. Svetlana Baranova (Museology, Conservation and Restoration of Historical and Cultural Objects) and Dr. Bella Shapiro (Theory and History of Culture) were promoted to the title of Associate Professor.