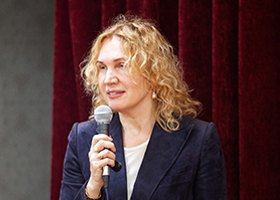 The research activity of RSUH in 2019 and the prospects for its development became the main topic of discussion at the session of Academic Council, which took place on April 21 online.

The report was made by Dr. Olga Pavlenko, First Vice-Rector. She drew attention to the fact that research in 2019 had been carried out in priority areas of humanities and social sciences and covered 63 fields.

Our research faculty have great potential and have proved to be able to attract external investment. The past year has been extremely successful.

“The indicators show that our research teams are able to realize complex tasks,” noted Dr. Pavlenko. - Our research faculty have great academic potential and have proved to be able to attract external investment. The past year has been very successful.

As part of the state assignment, we have carried out work on five projects, and all of them are fully implemented. Due to the high performance of our faculty, the Ministry of Education and Science of Russia have been increasing funding for the university by several million rubles annually.

Research teams are submitting more applications for grants, facilitated by the work of the Strategic Grant Department and the Research Department. In recent years, funding from grants has more than doubled. In 2019, research received 39 grants.

A significant part of internal funds goes to the Library. The work of the Publishing Center is duly funded as well. At large exhibition forums, our products are in great demand, we have become visible everywhere, and this is very important.”

The main forms of academic activity of researchers, including teachers, are publications and major international projects. The total number of publications of teachers and staff in the RSCI in 2019 was 3786, the total number of citations over the past five years is 21851, the Hirsch index is 187. The publication activity is growing steadily: if in 2018 the number of citations in the Scopus system was 64, in 2019 it went up to 231. RSUH occupies the 14th place among academic and educational organizations in Russia in the citations table.

RSUH has set a goal to enter the world university rankings and take part in the “Project 5-100”. To this end, the University works closely with international rating agencies (Quacquarelli Symonds, Times Higher Education, Academic Ranking of World Universities), administrative structures of RSCI, Scopus, Web of Science and other databases.

Among the fundamental academic projects, First Vice-Rector singled out “Research on the socio-cultural and socio-political aspects of interethnic and interreligious relations in the Russian Federation and the prevention of destructive manifestations in the student and youth environment”; “Cognitive mechanisms and discursive strategies to overcome sociocultural threats in historical dynamics: a multidisciplinary study”; “Historical memory as a factor in the evolution of socio-political systems (Sub-Saharan Africa and Mesoamerica)”; “Study of the state and prospects of the implementation of priority areas of scientific and technological development of the Russian Federation” and some others. Deductions from these projects also go to the development of academic environment of RSUH.

The most important of the applied socially significant projects, according to Dr. Pavlenko, were “Development and improvement of the personnel potential of the centers of open education in Russian and teaching Russian at leading universities in Italy” and “International competition of teachers engaged in educational activities in Russian in Israel, Armenia, Kyrgyzstan and Tajikistan.”

RSUH is developing new formats for interaction with engineering, technical, medical and military universities and organizations operating in the revenue-generating sector of economy. RSUH became part of the Moscow Scientific and Educational Consortium in the field of priority areas of scientific and technological development of Russia. In 2020, by agreement with MSUMD, it is planned to open a Risk Management Competency Center in the field of modern medical technologies, as well as the first joint department of humanities.

One of the key projects of the RSUH for the next few years is the Knorozov Multimedia Historical and Cultural Center, tasked with promotion of Russian culture abroad. Another new structure is the Research Center for Integrative and Digital Humanitarian Studies, aimed at improving the international ranking profile of RSUH.

In addition, Center for Visual Research of the Middle Ages and the New Times was created, designed to actively promote the academic achievements of RSUH at a new level, showing how historical knowledge can be transformed into large visual projects. An equally promising project is the Plato Research Center.

Another change is updating the composition of the Council of Young Scholars.

Rector Alexander Bezborodov praised the report of Dr. Pavlenko. In his speech, he touched on the formation of the Faculty of History at the Institute of History and Archives. “Academic and pedagogical schools are properly funded, and today the task is not to lose any of them,” said Rector. - We have many historians of renown. With the creation of the Faculty, we have the right to expect new academic developments, preservation and enhancement of the diversity of research, and most of all it regards the school of history of state institutions and public organizations, the school of auxiliary historical disciplines, and source studies.

We must make additional efforts in order to increase the recognition of RSUH on and off the Internet. Academic activity should be strengthened so that we see a lot more fundamental works.”

Another topic for discussion at the session of Academic Council was the results of a sociological survey on the effectiveness of the administrative units of the RSUH. At Rector’s initiative, an experiment was conducted measuring how management structures work at different levels, and how they interact with the University environment. The anonymous survey methodology was developed by the Faculty of Sociology and answers to 310 questionnaires were received.

“The indicators included information exchange, corporate culture (willingness to cooperate, goodwill), consistency and adequacy of the requirements for employees, features of document flow, and identification of the effectiveness of the information and educational environment,” said Dr. Natalia Velikaya, Dean of the Faculty of Sociology. The average score for the University was 4 out of 5. The offices most frequently interacting with teachers are Management, HR, Legal Office, Accounting, and Schedule Group.

The quality of the information and educational environment was evaluated according to a 10-point system. The survey evaluated level of access, effectiveness of the teacher’s personal cabinet, library system, classes and document flow in the 1C program. The highest rating was received by the library system and the Teacher Personal Account system.

The survey received many comments related to the optimization of electronic document management. Three quarters of the respondents say that it should be introduced more actively, quoting, above all, template documents and individual plans. Also, respondents asked to reduce red tape and introduce a single standard template. Another group of proposals is related to the need to improve interaction between employees of different administrative divisions. Many suggest holding training seminars, primarily on the use of 1C and on management consulting. And, of course, there are many proposals for coordinating the distance learning process.”

At the end of the meeting, Rector thanked the Academic Council for the adequate transition to distance learning.