The visit of His Excellency Mr. D. Bala Venkatesh Varma, Ambassador of the Republic of India to RSUH

The visit of His Excellency Mr. D. Bala Venkatesh Varma, Ambassador of the Republic of India to RSUH

On October 12, 2018 His Excellency Mr. D. Bala Venkatesh Varma, Ambassador of the Republic of India to Russia came to RSUH to meet with the staff and students.

From the Russian side, the meeting was attended by prof.Vera Zabotkina, Vice-Rector for International Cooperation, prof. Olga Pavlenko, Vice-Rector for Research, prof. Alexander Stolyarov, Director of the International Center for South Asian Studies, prof. Igor Isaev, Director of the Institute of Linguistics, Dr. Ludmila Pechishcheva, Associate Professor, Department of Regional Studies and Foreign Policy, Faculty of International Relations Institute of the History and Archive.

Prof Vera Zabotkina told HE Mr. Ambassador of India about the RSUH‘s relations with Indian universities in the framework of the Bologna process.

HE Mr. D. Bala Venkatesh Varma delivered a lecture on the role of India in the international arena since the second half of the twentieth century. He also told the Russian students about the official visit of Vladimir Putin, President of Russia to India and meeting with PM Narendra Modi in New Delhi (October 3-4, 2018). The acceptance of joint statement “Russia-India: a reliable partnership in a changing world” was the result of this summit meeting.

HE Mr. Ambassador of India offered to organize joint project as organizing the Indian Club between RSUH and Embassy of India in collaboration with the Jawaharlal Nehru Indian Cultural Centre for promotion the unification of languages and literatures of India and Russia through international seminars and workshops; spread of knowledge in the field of Indian philosophy, culture and traditions among Russian students.

Prof Igor Isaev, Director of the Institute of linguistics noted that Indian studies and Indian languages have been held at the Institute of Linguistics since the founding of the RSUH in 1992. This academic year 15 Russian students came to RSUH to study Indian studies and Hindi. He also hopes that in future these students will represent Russia with international cooperation in the South Asia region.

Mr. Bala Venkatesh Varma declared his ready to provide the necessary assistance in the implementation of research and educational cooperation programs with the RSUH and the exchange between teachers from Russian and Indian universities.

Dr. Ludmila Pechishcheva told the Indian guests about her research on the German-Indian strategic partnership at the beginning of the XXI century and asked HE Mr. Ambassador to tell his vision of the development of research and education between our countries.

Mrs. Krishna Roy told Russian students about the perception of Mahatma Gandhi by Indian people and people from all over the world, about the fact that Russia, as a successor of the Soviet Union, provided great moral, scientific and material support to India after receiving the independence. She told about many Indians came to Russia to study, and highly skilled Soviet specialists worked in different parts of India, helping to build the country's economy. 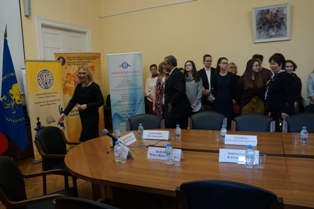 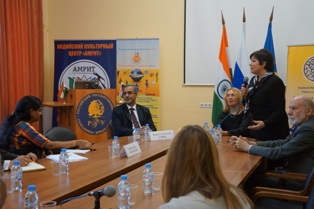 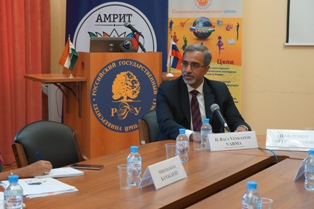 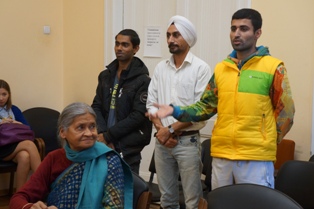