The Interacademic Conference «Studia Otientalia: the School of Young Orientalists - 2016» took place on October 13, 2016 within the context of the days of student science RSUH-2016.

The project «Studia Orientalia: the School of Young Orientalists - 2016» has won the competition «Crash-test of the student’s projects RSUH-2016». The main goal of this Conference was to develop Oriental studies among the students of RSUH and other famous Russian universities and to develop student’s individual skills of scientific work and public speaking.

Vera Lebedeva, a 3rd year student of RSUH International relations department, Hindi group, became one of the winners of the project "Crash-test of the student’s projects RSUH-2016". The idea of the project presupposed the management of the conference. Prof Alexander Stolyarov and Dr Indira Gazieva became the curators of the project.

The Organizing committee of the conference:

Pavel Basharin, Director of the International Centre for Iranian Studies;

Dimitry Vasilyev, Director of the Russian-Turkish Centre for education and research;

Leonid Kogan, Chair of the Department of History and Philology of Ancient Orient;

Alexander Logunov, Dean of the Division for history, politics and law;

Boris Medvedev, Dean of the Department of International Relations and Regional Studies;

Indira Gazieva, Secretary of the conference;

Vera Lebedeva, the third-year student of the Department of Regional Studies and Foreign Policy at the Institute for History and Archives;

Viktoria Bazyleva, the second-year student of the Department of Regional Studies and Foreign Policy at the Institute for History and Archives.

The opening ceremony started at 11 a.m. at the Conference Hall of RSUH (building 6, floor 6).

The Interacademic Conference «Studia Otientalia: the School of Young Orientalists - 2016» took place on Oct. 13, 2016 within the context of the days of student science RSUH-2016.

Prof. Alexander Stolyarov, Director of the International Centre for South Asian studies was the moderator of the session called “History, political science and international relations of the South Asia, Southeast Asia and the Far Eastern region”.

Four presentations were devoted to the issues of China.

Ilya Kolnin, HSE student, made his presentation on the current situation of the Chinese diaspora in the Southeast Asia using the example of Indonesia and Myanmar, and its reflection in historical retrospect. A

Anton Kharitonov, PhD student of the Faculty of history politics and law at the Institute of History and Archives presented his paper about the main problems of “soft power with the Chinese specificity”.

Four participants presented their reports to the problems of the Republic of India. For instance, Alexey Zakharov, PhD student of Volgograd State University presented his report on the foreign policy of Narendra Modi.

Olesya Koryuka, RSUH student gave a presentation on the treatment of "terrorism" in the national law of India.

Ivan Petrov, PhD student of Moscow State University presented his report on the issue of the integration into the Indian Union principalities (the case of Hyderabad).

Alexandra Kozlova, PhD student of the Institute of Asia and Africa, Moscow State University considered the population dynamics of the Mughal capital in the XVIII – the first half of XIX centuries.

Two reports were focused on Thailand. Svetlana Bolonova, student of the Oriental faculty of St. Petersburg State University observed the events, which happened on Oct. 6, 1976 in Bangkok and its coverage as viewed by a modern Thai historian.

Maxim Petrochenkov, PhD student of the Institute of International relations and political-social studies of the Moscow State Linguistic University discussed some aspects of the cooperation between the Russian Federation and the Kingdom of Thailand. And finally, Ekaterina Polkhova, student of the Oriental faculty of St. Petersburg State University reported on the problems of joining Japan to the Trans-Pacific Partnership from the perspective of its business-community.

Another session was devoted to the problems of history, political science and international relations in the regions of Middle East and North Africa.

Prof. Grigory Kosach, PhD in history was the moderator of this session.

The papers, presented at this session, mostly concerned the economic field of these regions. For instance, the paper of Darya Rozhdestvenskaya, student of St. Petersburg State University, was devoted to the trade and economic relations between Russia and the countries of North Africa since 1991 till the beginning of the "Arab Spring".

Daria Zimireva, also a student of St. Petersburg State University, gave a speech on the economic integration in the Arabian world.

The military-political conflicts issues were also discussed at this session. Ekaterina Taran, RSUH student presented the paper on the status of Jerusalem in the context of the Palestinian-Israeli conflict. Elisabeth Fokina, RSUH student talked on the border-armed conflict between Morocco and Algeria in 1963. In addition, the report of a student of St. Petersburg State University Elisabeth Chuyko considered the land-tenure in Ottoman Egypt prior to the 19th century.

Two more reports concerning Libya were presented at this session.

Participants of the linguistics session presented their reports on different aspects of the Oriental languages.

Dr Maria Rukodelnikova, Head of the Department of Oriental Languages of Linguistics Institute; and Dr Pavel Basharin, Head of the Iranian Studies Centre of RSUH, were moderators of this session.

Xenia Verkhova, MSU student covered the interesting aspects of Turkish. She presented the report on the morphological status of –DIK- and -AcAK- verbal forms in Turkish. Then Elisabeth Kotomina discussed the role of animals in Turkish linguistic culture.

Elena Kulanina, student of the Moscow State Institute of International Relations delivered the paper on the Oriental calligraphic traditions in the modern world. Finally, the paper of Daniil Mratkhuzin, student of Kazan State University was devoted to the study of peculiarities of spoken English in India.

7 participants presented their papers to the Literature session. Prof Sergei Serebryany, Director of Institute for the advanced studies was the moderator of this session.

A student of St. Petersburg University Darya Savelyeva talked about the criticism of young people in the Ethiopian poetry of the 21st century – the case of Solomon Moges’s works.

Participants of the Philosophy and Religion studies session covered the different aspects of Eastern religions and philosophy. Prof Rostislav Rybakov was the moderator of this session. Marina Alexandrova, PhD student of the Moscow State Institute of International Relations presented the paper on mythological perception of time by modern Indians. The role of painting in Chan Buddhism was discussed in the paper of Vladislava Berezina, student of Ural Federal University (Ekaterinburg). 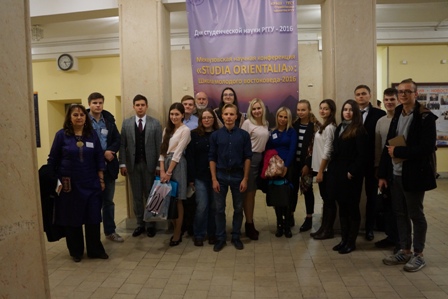