October, 4, 2016 Interacademic Research and Practice seminar of young scholars "BRICS as the Architect in the New World Order"

The event idea of organizational team was one of the winners of the annual RSUH competition for students initiatives entitled "Student Initiative Crash Test-2016".

This Interacademic seminar is organized for young scholars and students to make research on fundamental role in reshaping the world order.

The workshop is to take place in conjunction with the BRICS summit which is to be held on 15-16 October 2016 in Goa, India.

His Excellency Mr. Pankaj Saran, the Extraordinary and Plenipotentiary Ambassador of the Republic of India to the Russian Federation, will present the report “The role of India in BRICS”.

Mr. Zhao Guocheng, Minister-Counselor of Education of the Embassy of the People’s Republic of China to the Russian Federation will give an opening welcome speech to the participants.

Mr Thando Dalamba, Consular, Political Section of the Embassy of the Republic of South Africa, the representatives of the Embassies of the Federative Republic of Brazil and Ms. Victoria Varnavskaya, the Head of BRICS direction in the Сenter of International Cooperation of the Russian Union of Youth, have confirmed their presence at the opening of the event.

The main topics of the seminar:

Anna Bedareva, student of the Russian State University for the Humanities. Subject of the report: "The war on terrorism among the BRICS countries" 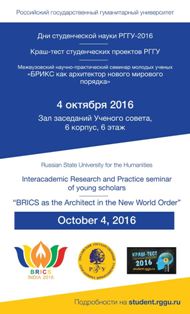