December, 24, 2015 RSUH students and teachers had a meeting with Honorable Narendra Modi, Prime Minister of India at the «Friends of India»’s cultural event which was held at Pavilion, 1, Expo Centre in Moscow.

There was a great concert which included Indian traditional dancing and songs. There were a plenty of Indian students from many universities all over Russia. They seemed to be very cheerful and impressed by the concert. The atmosphere was warm and friendly. Performers were full of bright emotions and energy. At the top of the evening the Honorable Narendra Modi, Prime Minister of appeared. Everybody was waiting for him. The famous Russian pop singer Valeriya presented to Prime Minister her book “Yoga with Valeria”.

Then we listened to the speech of Mr. Narendra Modi. The point of the speech was that with the help of Russia India has become an international leader nowadays. Mr. Narendra Modi encouraged developing the partnership of our countries in such direction like, for example, tourism. In addition to it, Mr. Narendra Modi mentioned the problem of terrorism. The whole world faced with it. Mr. Narendra Modi offered to make joint efforts to combat terrorism. Moreover, Prime Minister of India considered to be the most reliable partner of for many decades. His great words touched hearts of both the Indian and the Russian.

Briefly, it was the great emotional event which prooved the friendship and the partnership between our countries. It was priceless honour for us to be invited to such an important event.

Maria Cheglova, 2 year Hindi students of for the Humanities (RSUH)

Photos made by RSUH Hindi group 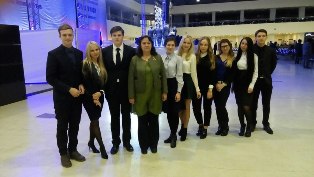 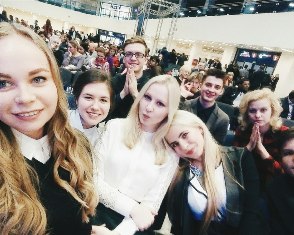 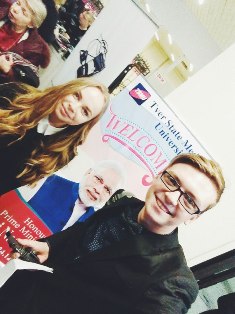